From Lab to Gallery: Simulated Marin Tour in Way Bay 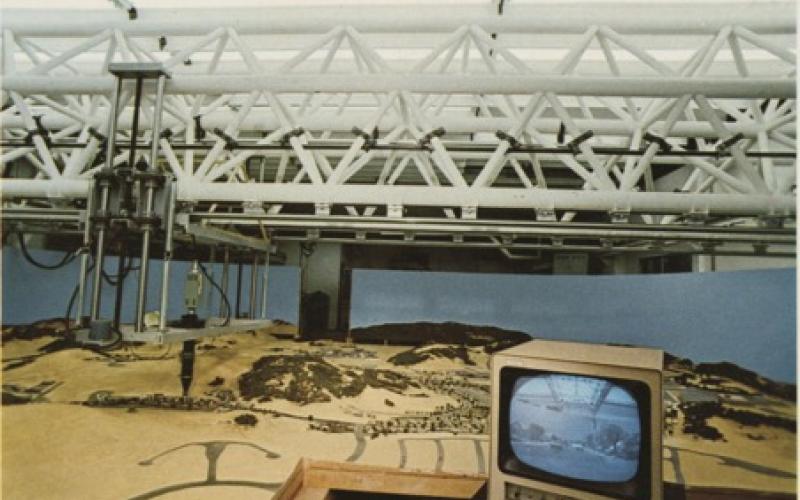 The camera, a monitor, and a section of the Marin model. All images courtesy of Peter Bosselmann.

The exhibition Way Bay (January 17–June 3, 2018) includes a film in which it appears that you are driving through Marin County, just north of San Francisco. The film is Simulated Marin Tour, and in reality it was made using a small, computer-controlled camera moving through a model of Marin—simulating the experience of driving through Terra Linda in San Rafael. But it looks amazingly real.

The film was made at the Environmental Simulation Lab (ESL) in the Department of Architecture at UC Berkeley, just up the hill from BAMPFA. The lab was started in the 1960s by architecture professor Donald Appleyard, who worked with psychology professor Kevin Lynch to experiment with graphic methods to record human experience of time and space. Urban design professor Peter Bosselmann took over the direction of the lab when Appleyard passed away in 1982. The Marin film was made in 1973 by John Dykstra, assisted by Jerry Jeffries, with supervision from Appleyard and Kenneth Craik. Dykstra is better known as the special photographic effects supervisor on the first Star Wars film and as a visual effects designer on the Spider-Man films. The camera he helped develop to create Simulated Marin Tour was a precursor to the Dykstraflex, a special camera system used to film special effects for the original Star Wars, for which Dykstra's team won the Academy Award for visual effects in 1978. 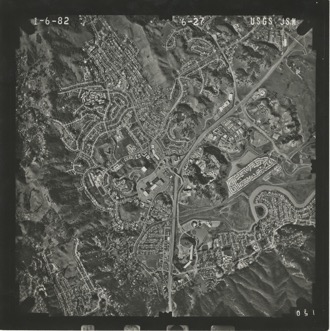 The Marin model from above.

The Way Bay Gallery Guide includes a quote from Bosselmann, who gives the backstory of why the Simulated Marin Tour was created: "The film was made as part of a validation study to test how model simulation could aid the decision-making process in the approval of large planning and engineering projects. A computer-guided camera mounted on a moving crane traveled at eye level through a model landscape and recorded, on 16mm film, the experience of a twenty-minute drive." Although Dykstra could have populated Simulated Marin Tour with special effects, the Environmental Simulation Lab team was not interested in making a science fiction film, but rather one about our everyday world. The lab's work was concerned with predicting how architectural decisions could change our environment. But we are fascinated by imitation of our everyday environment, and this research-based film fits right in the Way Bay exhibition at BAMPFA. It demonstrates how objects created for academic research can also be appreciated for their aesthetic value. 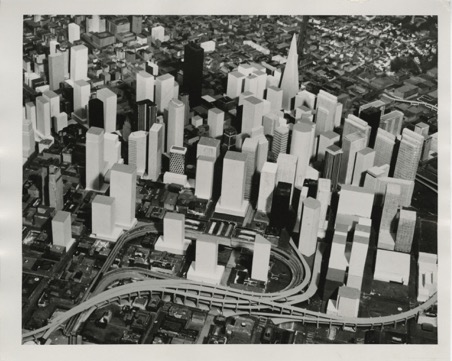 A model of downtown San Francisco, originally constructed as part of a WPA project, here shown with updates made at ESL in the mid-1980s.

The ESL lab is closing with the retirement of Peter Bosselmann. What will happen to these large models now? Are they “just” architectural studies, or might they be appreciated as sculptural artworks? Some of the ESL’s films, including Simulated Marin Tour, are now part of the BAMPFA collection. Additionally, I have digitized the paper collections that Bosselmann kept as documentation of the lab's projects, including photographs, research materials, and newspaper articles. They offer an eye-opening perspective on how cities evolve. The images and files will become available for research in the Film Library and Study Center at BAMPFA. Simulated Marin Tour is on view in the exhibition Way Bay through June 3, 2018.

This essay was written as part of the Out of the Vault project, funded by the National Endowment for the Arts.