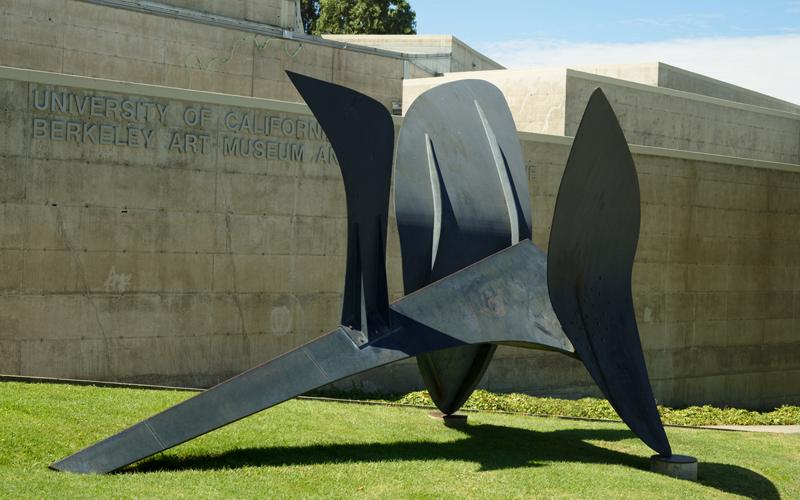 The UC Berkeley Art Museum and Pacific Film Archive (BAMPFA) was recently awarded a prestigious Save America's Treasures grant in the amount of $109,576 to conserve and relocate a signature work in its collection. Alexander Calder's monumental stabile The Hawk for Peace was donated to the museum in 1968 by the celebrated American artist in memory of his brother-in-law, Kenneth Aurand Hayes, a member of the UC Berkeley class of 1916, varsity athlete, and namesake of the Berkeley Rowing Club. Measuring 13 feet high by 11 ½ feet wide by 23 feet long, and weighing 11,684 pounds, The Hawk for Peace was noted at the time of its installation as the most monumental public sculpture in the Bay Area. The artist Jean Arp coined the term “stabile” in 1935 to describe Calder’s large-scale stationary abstract sculptures, as opposed to his kinetic smaller works, termed “mobiles.”

For forty-seven years the sculpture greeted visitors to the museum's former location, on Bancroft Way. With BAMPFA’s move to its new downtown Berkeley building in 2016, the sculpture was removed to a secure off-site collections storage facility in Richmond, California. When restoration is complete, The Hawk for Peace will be installed across the street from the new museum near the Crescent Lawn on the UC Berkeley campus.

With an additional grant of $25,000 from the National Endowment for the Arts and the support of The Lipman Family Foundation and other generous individuals, the Calder conservation project will begin later this year, with an anticipated completion in Fall 2021.

“The Hawk for Peace is a magnificent work,” said BAMPFA Director and Chief Curator Lawrence Rinder. “It is cherished by many museum patrons and visitors from the Bay Area and beyond, and a clear demonstration of the Calder family’s connection to Berkeley and Calder’s artistic prowess. The stabile holds a special place at BAMPFA, and the museum strives to honor Calder’s legacy by maintaining the stabile and to ensure it is continuously on public view, making the sculpture freely accessible to UC Berkeley students, faculty, staff, and visitors from around the world.”

This project was made possible in part by the Institute of Museum and Library Services and the National Endowment for the Arts.