Off the Shelves: Digitizing Filmmaker Recordings from Cassette Tape 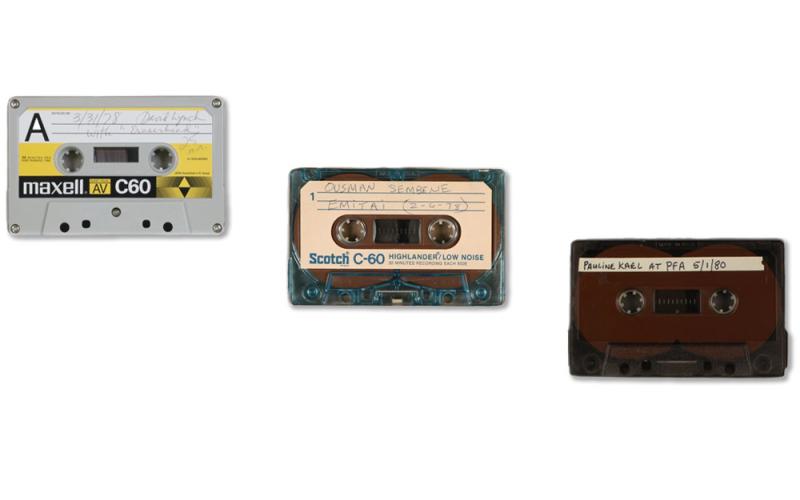 Curious about hearing one of David Lynch’s first live Q&A’s for Eraserhead? Wondering what unscripted moments Pauline Kael shared with a hometown audience? Intrigued to sit in on a 1976 panel with Ousmane Sembene, a giant of Senegalese cinema, translated by none other than the legendary political activist Angela Davis? Thanks to a generous grant from the Council on Library and Information Resources (CLIR), these rare moments—and many more—can now be shared and made accessible to the public. Through the project, “Saving Film Exhibition History: Digitizing Recordings of Guest Speakers at the Pacific Film Archive, 1976 to 1986,” BAMPFA is digitizing a decade’s worth of guest-speaker recordings, filmmaker presentations, panel discussions, and Q&A’s from the early years of the Pacific Film Archive (1976–86), and making them available online through the Internet Archive.

The recordings will be made available online later in 2020, through a collaboration with the Internet Archive. Until then, here is a small sampling of the project: David Lynch live in person introducing Eraserhead in March 1978 (“This is the first time I’ve done this, so go easy on me.”); Ousmane Sembene, translated by Angela Davis, during a February 1978 panel on Senegalese cinema; and Pauline Kael, returning to Berkeley after living here in the 1950s (and helping run the famed Berkeley Cinema Guild), speaking on her career in March 1980. Enjoy!

This project is supported by a Recordings at Risk grant from the Council on Library and Information Resources (CLIR). The grant program is made possible by funding from The Andrew W. Mellon Foundation.

Hear one of David Lynch's first live Q&A's for Eraserhead from March 1978 ("This is the first time I've done this, so go easy on me.").

Listen to insights from the "father of African film," Ousmane Sembene, from a February 1978 panel on Senegalese cinema—translated by none other than legendary African American activist Angela Davis.

In March 1980, American film critic Pauline Kael returned to Berkeley after living here in the 1950s (and helping run the famed Berkeley Cinema Guild), discussing her career to a hometown audience at the PFA.