Off the Shelves—Black Cinema, Black History 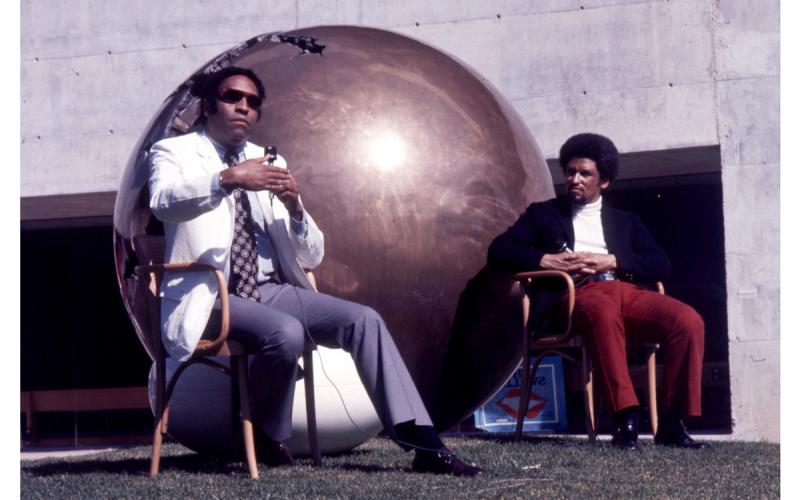 A celebration of Black cinema through the BAMPFA Film Library's collection of rare films, images, and cinema ephemera.

Black History Month is in full swing and there's no better time to spotlight some treasured items on Black cinema, and specifically Black cinema in the Bay Area, from the BAMPFA Film Library's collection of films, audio recordings, and cinema ephemera. Political newsreels created for the Black Panther Party; audio appearances by Angela Davis, Charles Burnett, and Haile Gerima; and early interviews with Spike Lee and Julie Dash are just some of the rarities of the collection. 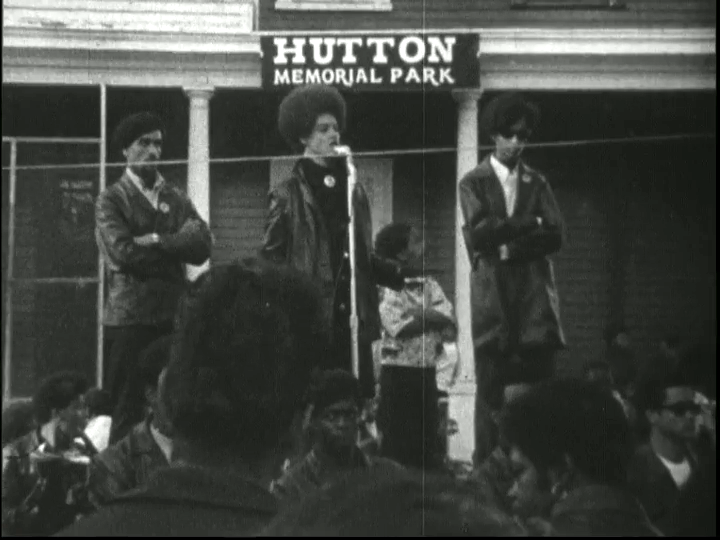 Still from Black Panther (Off the Pig!)

One of the most notorious political shorts ever made, Black Panther (Off The Pig!) was created by the pioneering Newsreel collective in 1968 as a document on the activism and intent of the nascent Black Panther Party. Shot on the streets of Oakland, the film features Huey P. Newton, Bobby Seale, and more, and it was so effective in its message that it was even used by the Black Panther Party as a recruitment tool. Even now, its staccato rhythms—seemingly cut to the sound of gunfire and chants—are as contemporary as any music video, with the film standing as a testament to the Black Panther Party, and to Oakland itself. The film was digitized by the BAMPFA Film Library and the Media Preserve through a grant from CAVPP (California Audio Visual Preservation Program), and is available at the Internet Archive, along with many other Newsreel films. Newsreels' contemporary incarnation, California Newsreel, offers full distribution rights, and in recent decades has become the top source of African American and African independent cinema. (A different angle of the Black Panthers can be found in Agnès Varda's short Black Panthers, which was made during her visit to California and the BAMPFA in 1968!) 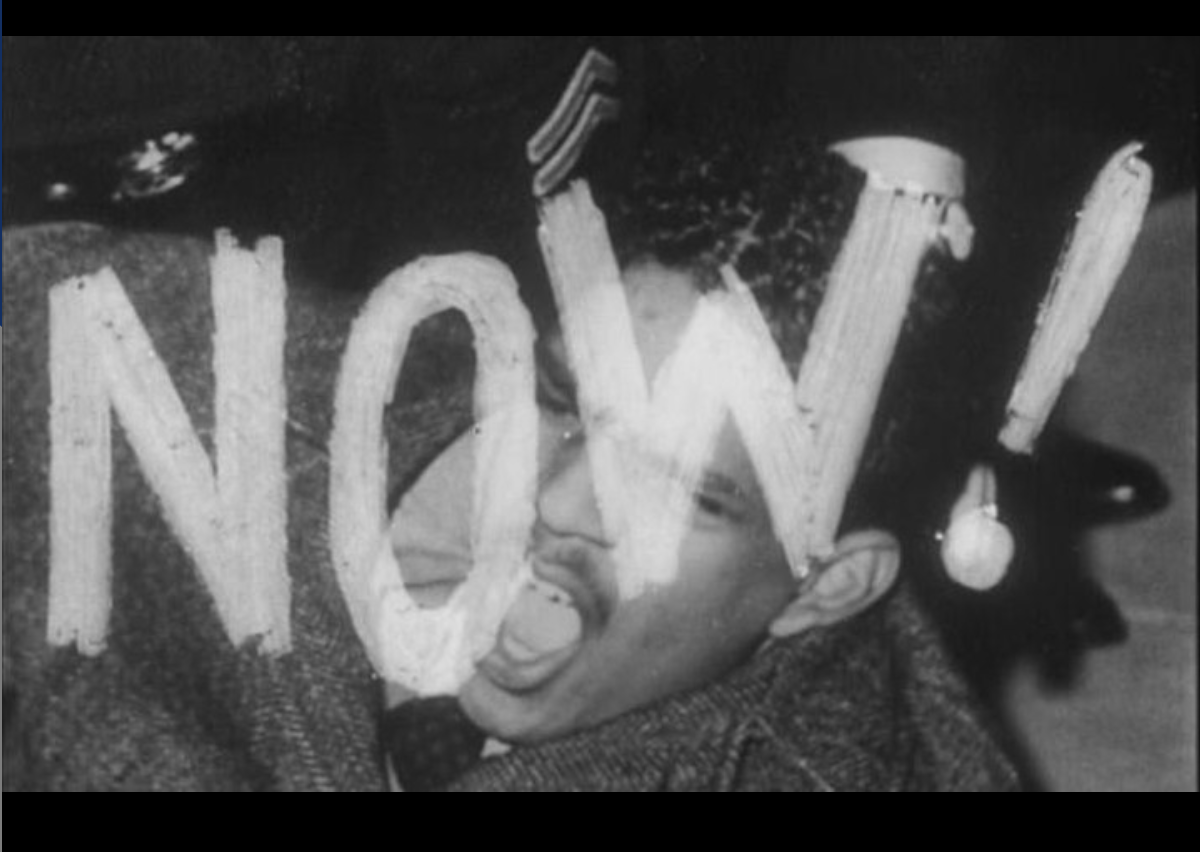 A strong companion piece to Black Panther is NOW!, also available in our collection. This 1965 agit-prop classic on Black oppression and police violence by Cuban master Santiago Alvarez (whose work inspired Newsreel) reappropriated newsreels and TV footage, then cut the images to the Lena Horne protest song "Now!," a work so provocative it had been banned by multiple American radio stations. “The message of this song’s not subtle," Horne sings, in a phrase that matches this film. "No discussion, no rebuttal.” The film library holds a 16mm print, but it is also available to view online through Havana's film institute ICAIC. 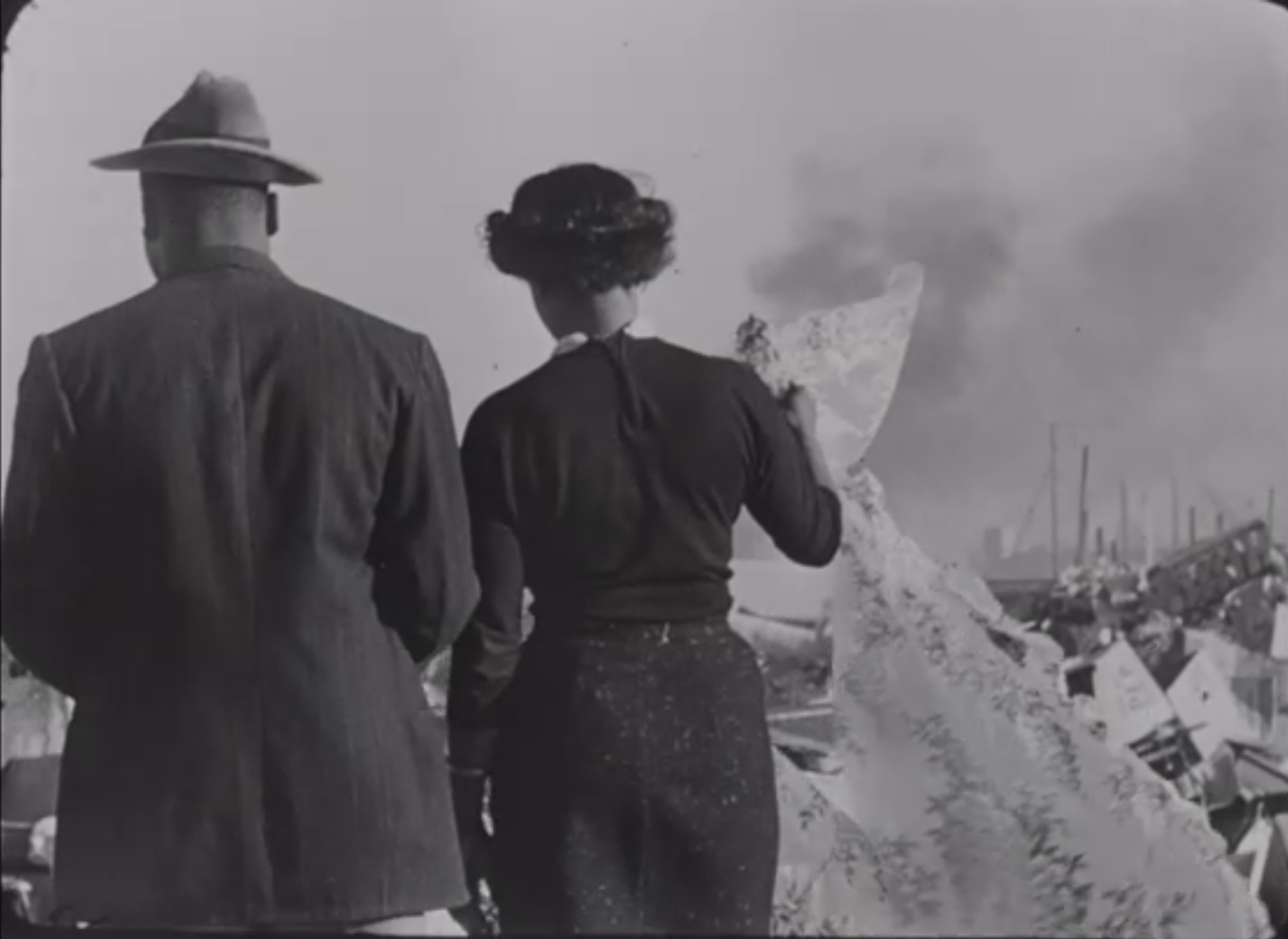 Still from Have You Sold Your Dozen Roses?

Newsreel was also responsible for another key portrait of Black activists in the Bay Area in our collection, Stagger Lee (1970), a filmed interview with Black Panther Bobby Seale as he was being held in the San Francisco County Jail. This piece was codirected and photographed by Allen Willis, one of the legends of Bay Area filmmaking (his archives are held at the East Bay Media Center). Along with the poet Bob Kaufman, Willis was one of the handful of Black artists, writers, and filmmakers within the Beat Movement of the 1950s. Moving from political action to poetic introspection, Willis's Beat cinema classic Have You Sold Your Dozen Roses? (codirected with Philip Greene and David Myers) is a collaboration with none other than Lawrence Ferlinghetti, and features narration/poetry by Ferlinghetti over scenes of a city dump and those who toil within it. 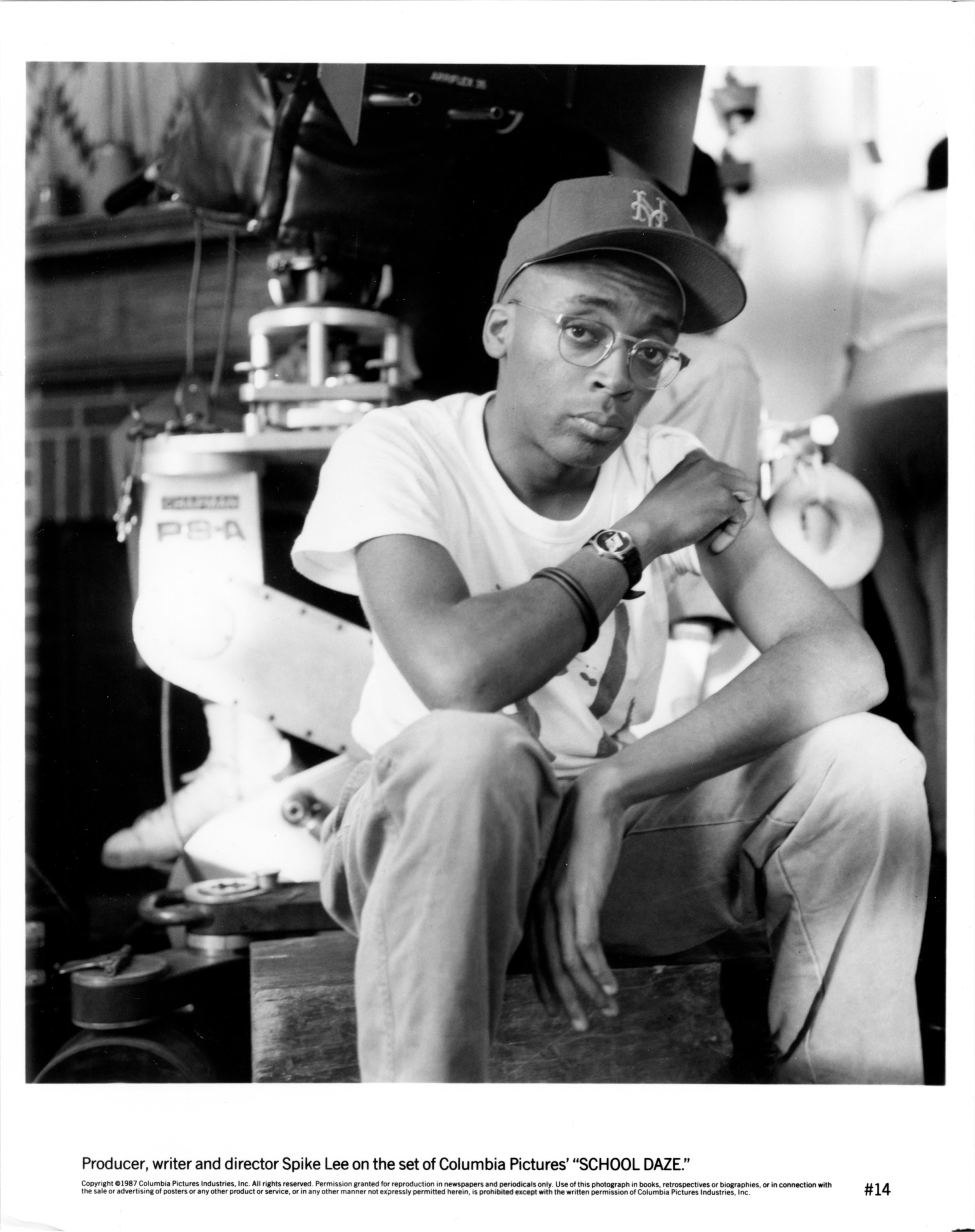 Longer features in the collection include archival 35mm prints of Julie Dash's Daughters of the Dust, Spike Lee's Do the Right Thing and She's Gotta Have It, Charles Burnett's My Brother's Wedding, and Jamaa Fanaka's Welcome Home Brother Charles, as well as some key works on Black representation in cinema, like Michael Roemer and Robert Young's Nothing But a Man and Shirley Clarke's Portrait of Jason.

Some excellent recent programming by the Black Aesthetic curatorial group (which has featured Ryanaustin Dennis, Ra Malika Imhotep, Leila Weefur, and Jamal Batts, among others) has spotlighted several shorts in our collection that bear witness to the Black experience. The films range from documentary portraits of folk singers to agit-prop labor works and children's animation, and include early titles by future leading figures such as Julie Dash and Arthur Jafa. Of special interest is Sargon Tamimi's Right On/Be Free!, a 1971 portrait of Black identity in the arts with appearances by cultural figures like the Alvin Ailey Dance Company's Judith Jamison, featured dancing on the terrace of the old BAMPFA building! Nearly all films mentioned above have been digitized and are available for viewing by individuals in the Film Library or for small groups or classes in BAMPFA's small theater.

The Film Library's collection of audio recordings of guest appearances provides many rewards for those interested in Black cinema, or for anyone curious about how filmmakers present themselves and their creative process to an audience. Our 2018 CLIR project digitized many of our recordings from 1971 to 1986, including appearances by such Black creatives and activists as Angela Davis, both appearing for a film about her in 1978 (start with side 2) and also acting as translator for a conference on Senegalese filmmaking (!) that included the legendary directors Ousmane Sembène, Ben Diogaye Bèye (codirector of Touki Bouki), and Paulin Soumanou Vieyra. A legend in American independent cinema, and a key figure in the LA Rebellion movement, Charles Burnett has been a BAMPFA guest several times, including for the local premiere of his My Brother's Wedding in 1984 and for a retrospective and panel discussion in 2004. Burnett's colleague in the LA Rebellion, Haile Gerima, can be heard discussing his groundbreaking Bush Mama here in 1979, while the great Marlon Riggs was a guest many times, accompanying titles like Ethnic Notions in 1988, Tongues Untied in 1990, and Color Adjustment in 1992. 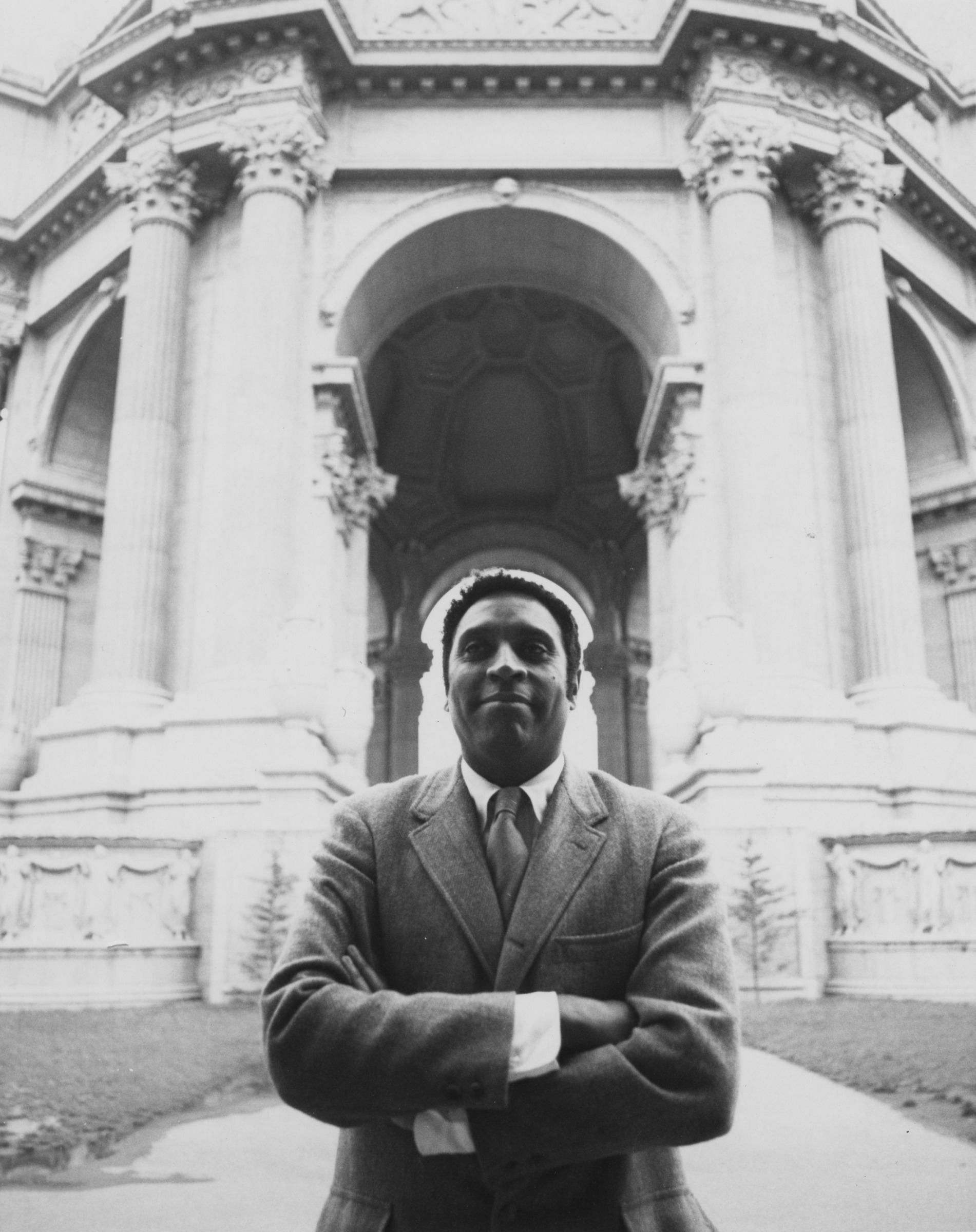 Many of the 1970s talks were hosted by Albert Johnson, a legend in the Bay Area film community. The son of a dancer at Harlem's Cotton Club (whose lessons on showmanship he put to good use in the lecture hall), Johnson was one of the most visible Black curators and film critics during the rise of film culture in the 1950s and 1960s. Program director for the San Francisco International Film Festival from 1965 to 1972, he brought in guests such as Bette Davis, Gene Kelly, and Paul Newman. In 1974 he joined what was then called the Afro-American Studies Department at UC Berkeley, teaching classes until his passing in 1998 on everything from musicals to Third World Cinema and images of ethnic minorities on film. Thanks to our CLIR digitization grant, you can listen to many of his interviews on the Internet Archive. The cofounder of UC Berkeley's prestigious Film Quarterly journal and director of the Black Filmmakers Hall of Fame in Oakland, he also traveled the world as a festival advisor and even a government "film diplomat," representing American cinema to Africa, Asia, and behind the Iron Curtain during the Cold War. His archives are held at UC Berkeley's Bancroft Library. 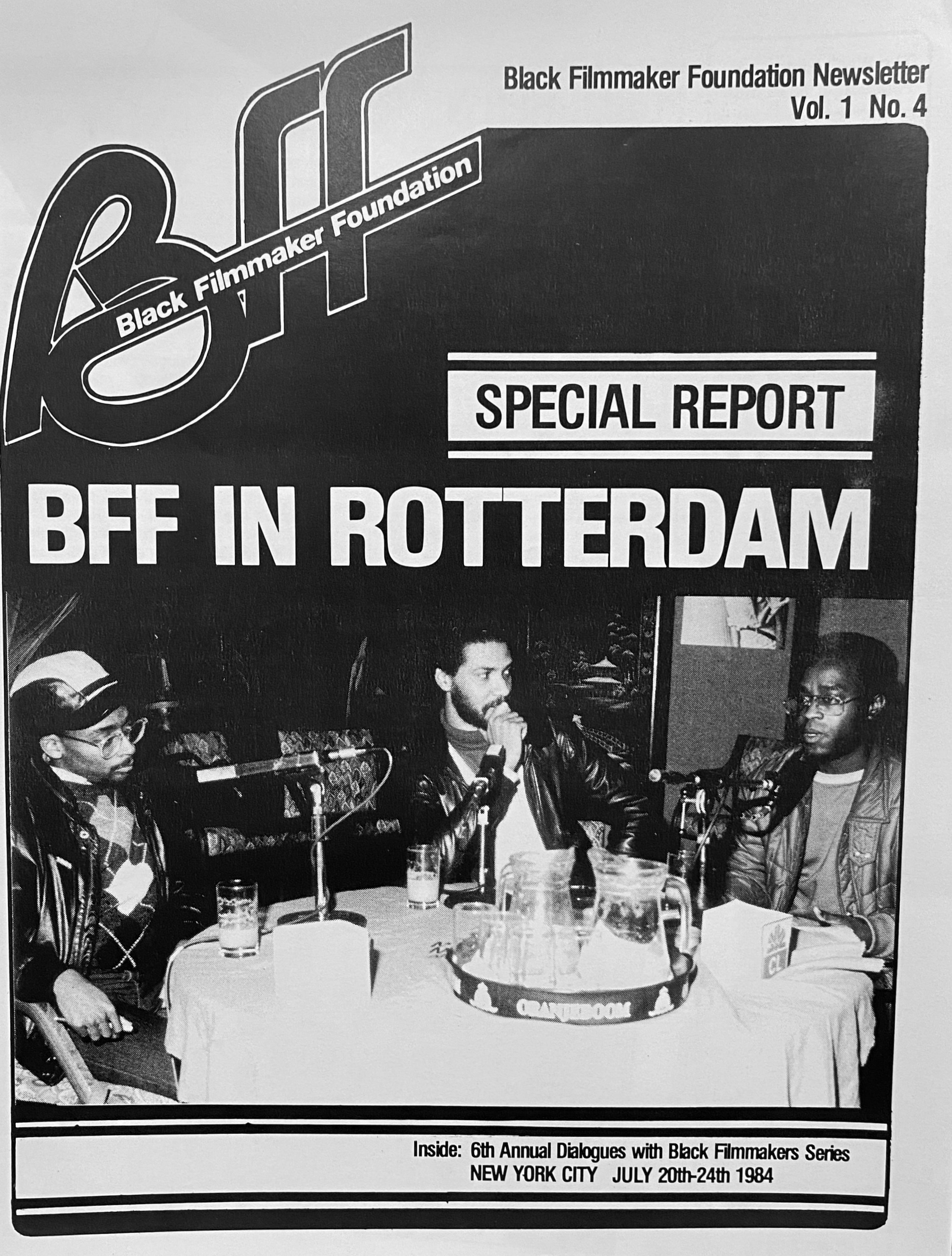 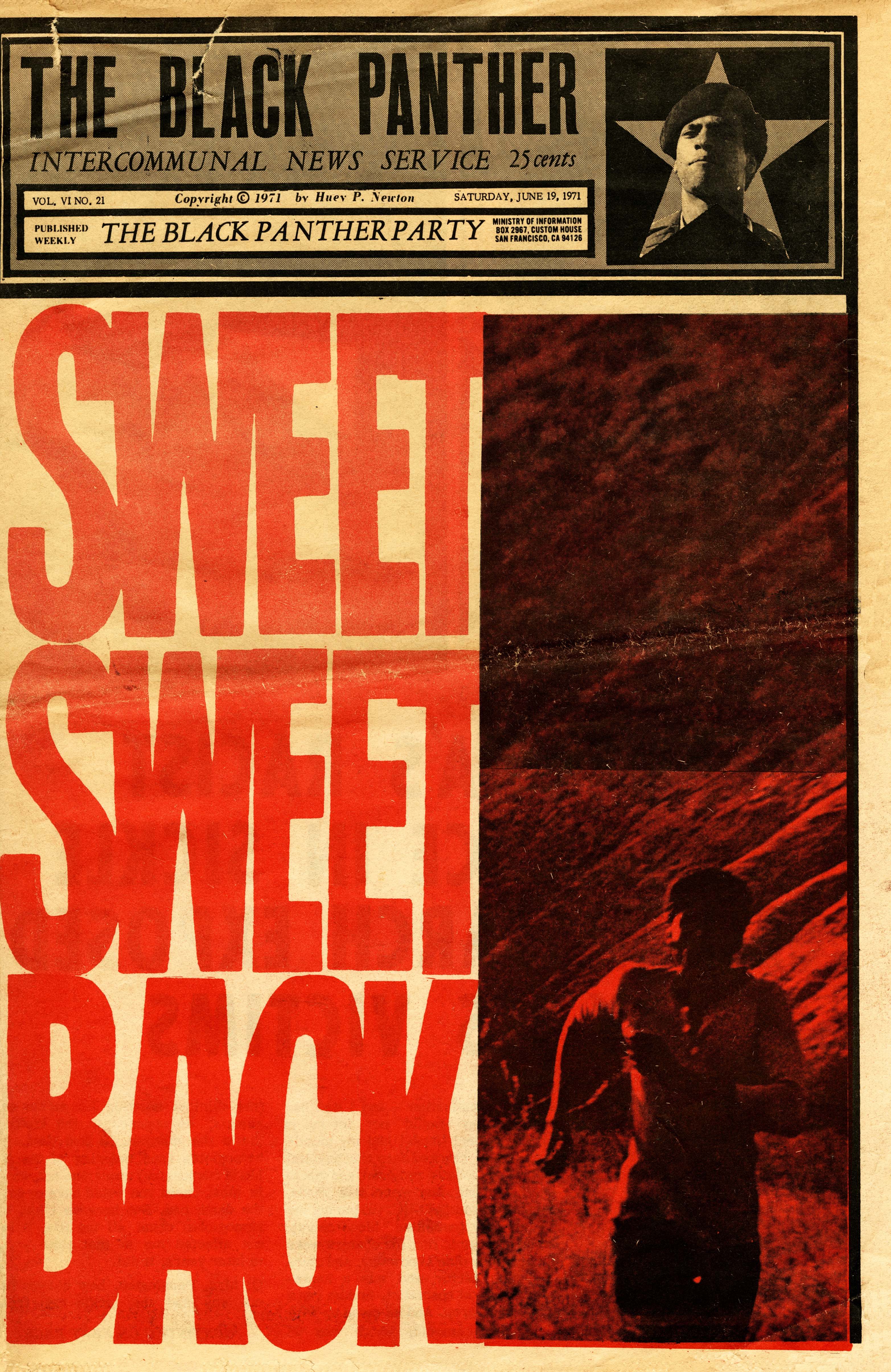 A great friend of the BAMPFA Film Library, Johnson donated many press kits, festival catalogs, and reviews to our collection, as well as Black cinema journals like Black Filmmakers and The Black Scholar and catalogs from Oakland's Black Filmmakers Hall of Fame ceremonies. You can find many of these pieces on our online resource Cinefiles; highlights include lengthy talks with Marlon Riggs in 1990 and 1993, and an early interview from Black American Weekly with a young film student named Spike Lee, just before his thesis film debuted in New York's New Directors / New Films series. ("People think that everything you do must represent every Black person in the United States. That's too much of a burden for Black film to carry.") Julie Dash discusses her filmmaking vision with Zeinabu Irene Davis (a similarly accomplished director) in this 1991 Wide Angle piece, while a cover of Black Filmmakers shows Charles Burnett, Spike Lee, and Warrington Hudlin gathered at the 1984 International Film Festival Rotterdam (pictured above). You can also enjoy a rare foray into film criticism by the Black Panthers in this review of Sweet Sweetback's Baadasssss Song (pictured above), penned by none other than Huey P. Newton; skim through an entire newsletter from the Oscar Micheaux Society; or enjoy voluminous press kits for Burnett's To Sleep With Anger or Dash's Daughters of the Dust.

This small sampling can hopefully provide a glimpse into Black cinema resources at the BAMPFA Film Library. Thanks to our programmers and Digital Content team, you can also sit in with documentary filmmaker Madeline Anderson's interviews with Orlando Bagwell during her 2016 retrospective, listen in on Arthur Jafa and Stephen Best in conversation during Jafa's 2018 MATRIX show, or hear Yance Ford's 2018 Les Blank Lecture.

While many of these works can be sampled online, the remainder can be viewed, heard, or read onsite at the BAMPFA Film Library once we reopen following the pandemic closure. For more information, please visit us online or email us.