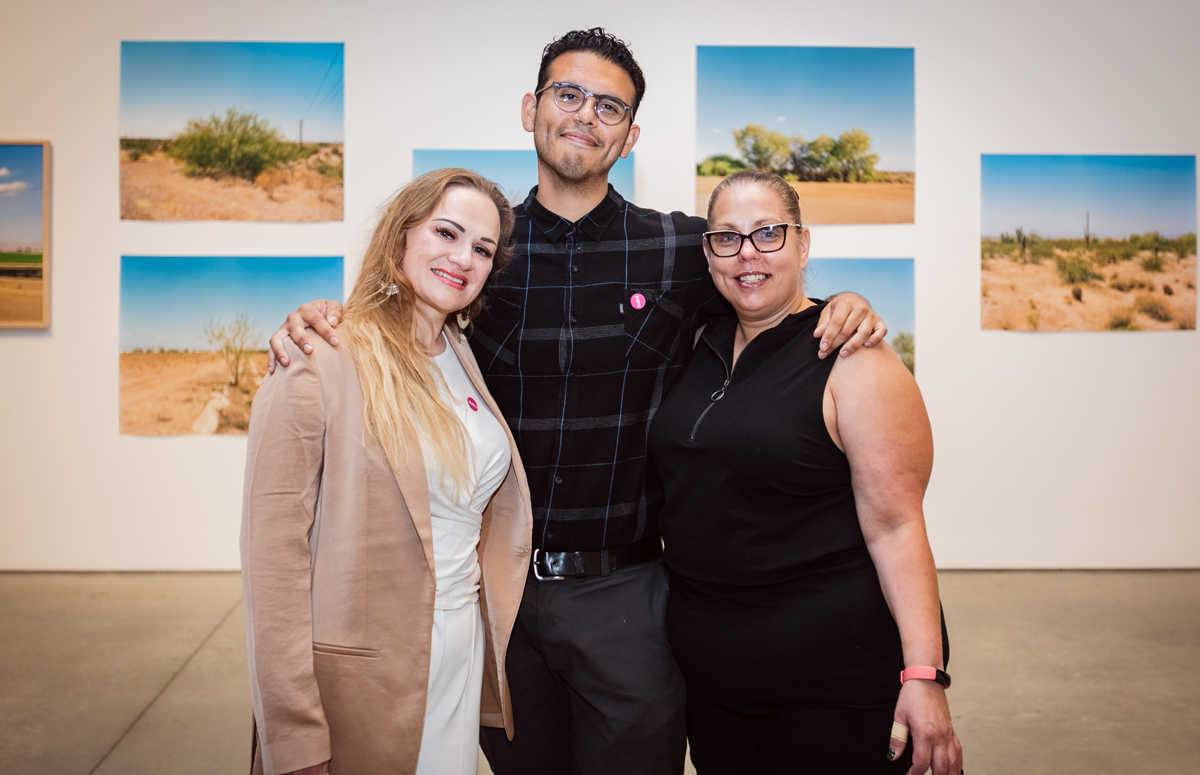 “Did you know that between 1970 and 2000, the incarceration rate in the United States increased by more than four hundred percent?”

This sobering question was posed by Eli Martinez to an assembled group of visitors who had just arrived for a tour at the Berkeley Art Museum and Pacific Film Archive. A conversation about the crisis of mass incarceration might seem like a strange way to begin a tour of a new art exhibition, but this was not a typical art exhibition, and Martinez wasn’t a typical tour guide. The guests were here to see the flagship exhibition of BAMPFA’s fall season: Undoing Time: Art and History of Incarceration, an artistic inquiry into the historical, political, and philosophical dimensions of incarceration and its aftermath. And to help unpack the thorny themes that the exhibition explores, the museum had turned to a community who have deep, personal familiarity with the subject matter: the Berkeley Underground Scholars, a group of formerly incarcerated and system-impacted students on the UC Berkeley campus.

For the next forty-five minutes, Martinez guided the tour group through Undoing Time, which opened at BAMPFA on September 3 and will remain on view through December 18. The artworks in Undoing Time were commissioned from a group of eleven emerging and established artists, who were each invited to explore the exhibition’s carceral themes through their own creative practices. The project began at the Arizona State Art University Art Museum, which in 2020 convened a series of workshops between the participating artists and a group of scholars, students, and activists working on the frontlines of the carceral crisis. Over the course of this unique yearlong collaboration, the artists eventually produced eleven ambitious new works—including some that occupy whole rooms in BAMPFA’s spacious main gallery, and one that will be unveiled on Alcatraz Island later this season.

An undergraduate senior enrolled at Cal through the Berkeley Underground Scholars program—who also serves as the program’s operations coordinator—Martinez is one of three Underground Scholars who are working with BAMPFA this fall to share their unique perspective on Undoing Time, along with his fellow students Michelle Maxwell and Erin Katherine McCall. For Martinez, the exhibition holds a dual resonance: both with his lived experience as an individual whose life and family have been impacted by the carceral system, and with his academic work as sociology major who studies the individual and collective impact of incarceration. On the same day that he led his first exhibition tour at BAMPFA, Martinez co-published a new policy brief highlighting the plight of formerly incarcerated Californians who are conscripted to work as firefighters during their incarceration but are ineligible for firefighting jobs upon release; during the tour, he wove these research findings into his remarks about an installation by Carolina Aranibar-Fernández, which uses the visual metaphor of handmade adobe bricks to highlight the crisis of exploitation inherent in prison labor.

Contrary to many mainstream depictions of prison life, the artworks of Undoing Time draw heavily on the carceral experiences of communities in the Western and Southwestern United States. During the tour, Martinez, a Los Angeles area native, pointed out a multimedia installation by Sandra de la Loza that highlights the history of LA’s Lincoln Heights Jail—a decommissioned carceral complex built in 1927 that was reclaimed by a group of local artists and activists who transformed it into a space for creative expression. Noting that he had not been aware of the Lincoln Heights’ history despite growing up nearby, Martinez spoke about its metaphorical power as a site where young Black and brown artists came together to imagine an alternative future in a post-carceral world.

First launched on the UC Berkeley campus in 2013, the Berkeley Underground Scholars program has supported hundreds of individuals as they transition from experiences with incarceration into a new chapter as students at America’s leading public research university. While members of the program pursue a wide range of academic majors, many choose to focus their studies in areas that directly relate to their encounters with the carceral system. In a conversation after his tour, Martinez shared that he is currently applying to PhD programs in sociology, where he hopes to continue his research into the community impacts—financial, social, and psychological—of community supervision (the probation and parole system) as it currently functions in the United States and the disparate effects this has on kin networks. As Martinez described it, “When people get out of prison or jail, they’re happy to have their loved ones back, but there’s an uneasiness too. Even though they’re free, they’re not entirely free.”

This focus on these concentric ripples of incarceration on a broader community was driven home in one of the largest artworks in the exhibition, a room-sized multimedia installation by the artist Mario Ybarra Jr. Entitled Personal, Small, Medium, Large, Family, the installation partially reconstructs the Red West Pizzeria in Wilmington, a working-class, Mexican-American neighborhood in the Harbor region of Los Angeles. Photographs of the neighborhood’s Little League teams hang on the walls, including one of the artist’s childhood best friend, Richard, who was just released from prison after thirty-two years behind bars. An accompanying video interview captures Richard’s personal story: how he maintained his identity, refusing prison tattoos, and working hard to maintain a positive attitude in the face of adversity for more than three decades. Pausing at the installation, Martinez observed that the titular pizza orders advertised on the wall of the restaurant represent the long-term impacts of incarceration on the lives of individuals like Richard, as well as their families and communities. He also offered some personal reflections on Richard’s experience as an incarcerated person who committed himself to education as a means of coping with his carceral experience. 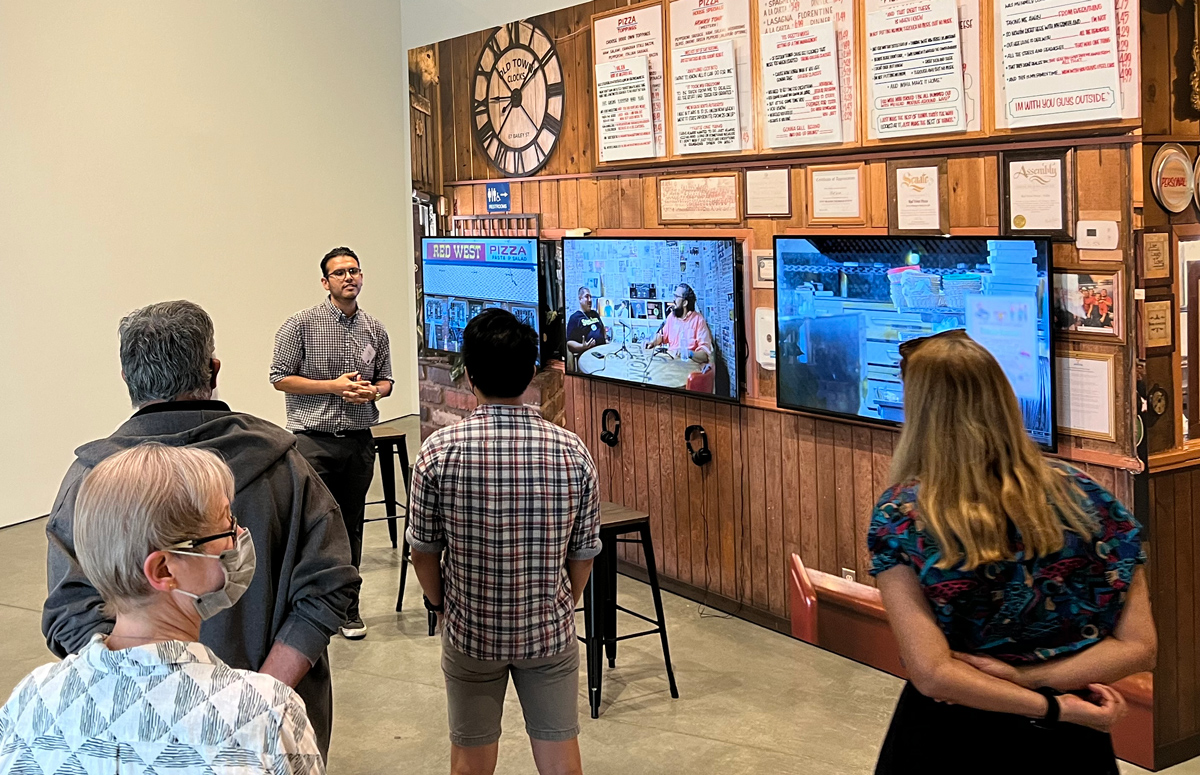 “It’s really inspiring to hear about someone like Richard who utilized education to deal with a difficult situation in the present and to improve his future,” said Martinez. “That’s a really inspiring message for those of us in the Underground Scholars program, as we too believe in the transformative power of education.”

Tours of Undoing Time: Art and Histories of Incarceration led by members of the Berkeley Underground Scholars program will continue throughout the run of the exhibition. See specific dates and times