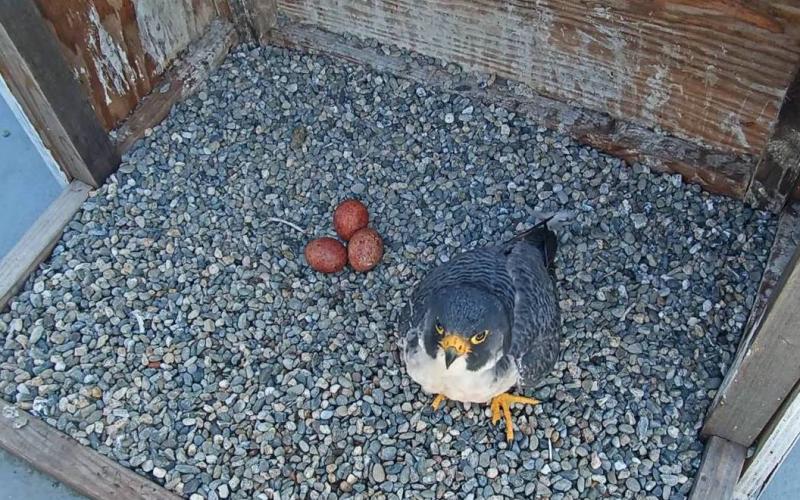 Grinnell and eggs in the Campanile nest box.

Berkeley’s most famous falcons are nesting in the Campanile for the third consecutive year, incubating a clutch of three eggs that are due to hatch soon—and if all goes as expected, we’ll be watching!

BAMPFA is partnering with the UC Berkeley Museum of Vertebrate Zoology, the Golden Gate Raptor Observatory, the East Bay Regional Park District, the Institute for Wildlife Studies, and the Institute for Bird Populations to present a live webstream from the nest on BAMPFA’s huge outdoor video screen throughout the day on Thursday, April 25. That is the day scientists predict the peregrine falcons’ three eggs will hatch following an incubation period of 33 to 34 days. Raptor specialists from the various partner organizations will be on hand from 8:30 a.m. to 6:00 p.m. to answer questions and explain what is happening as the peregrine chicks pip (break through the egg shell) and hatch.

Peregrine falcons, the world’s fastest birds, have recovered spectacularly in North America thanks to protections from the Endangered Species Act. While only two Peregrine pairs were known to nest in California at the DDT-caused population low in 1970, more than 400 pairs are estimated to flourish in the state today. The Cal pair—dubbed Annie and Grinnell—have built their nest, called an eyrie, in the Campanile bell tower since 2017, hatching two chicks that year and three in 2018.

Scientists from UC Berkeley and its partner organizations set up a tray of gravel and roofed nest box in the bell tower to prevent the eggs from rolling and keep the nest dry, and earlier this year installed two cameras to monitor the eyrie. A successful crowd-funding initiative raised more than $14,000 to cover the cost of the cameras, which livestream video available to the public 24/7 on YouTube at UC Berkeley Campanile Peregrine Cam.

Stop by BAMPFA’s colossal outdoor screen to check out the livestream and meet our falcon experts!