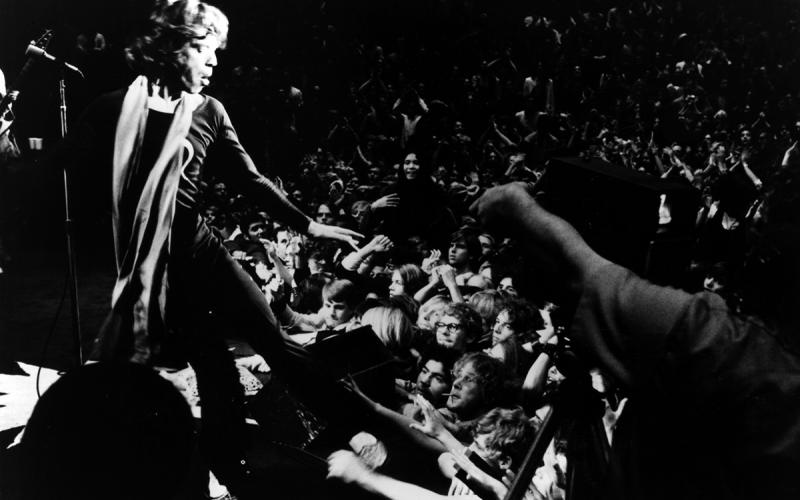 Mayhem unfolds in Gimme Shelter, which scrutinizes the ill-fated free concert hosted by the Rolling Stones. This film screens July 19.

Turn up the volume for the greatest rock stars in movie history, who head to BAMPFA's big screens all summer long. Glam rock, hip-hop, punk, and pop music blast indoors on our Meyer Sound system—and outside at three free screenings on our massive LED screen on Addison and Oxford Streets.

With independent documentaries and concert films like Monterey Pop and Gimme Shelter, narrative films such as King Creole and Privilege, and the experimental cinema of artists like Kenneth Anger, It's Only Rock 'n' Roll celebrates the resonance of rock and cinema. Take a rock-and-roll adventure with the Beatles in the docufiction A Hard Day's Night and jam out with David Byrne and the Talking Heads in Stop Making Sense. Soak up the soulful sounds of the Stax scene and the Black Power era in Wattax, and see that legacy live on in Dave Chappelle's Block Party, which features R&B and hip-hop performers like Kanye West, Common, and the Fugees. And dive deeper into cinema's musical roots with film scholar and author David E. James, who presents a lively illustrated lecture on June 22.

It's Only Rock 'n' Roll kicks off June 13 with a free outdoor screening of Stop Making Sense. Get amped up with this playlist of rockin’ songs from the films before they hit our speakers (and screens) this summer.