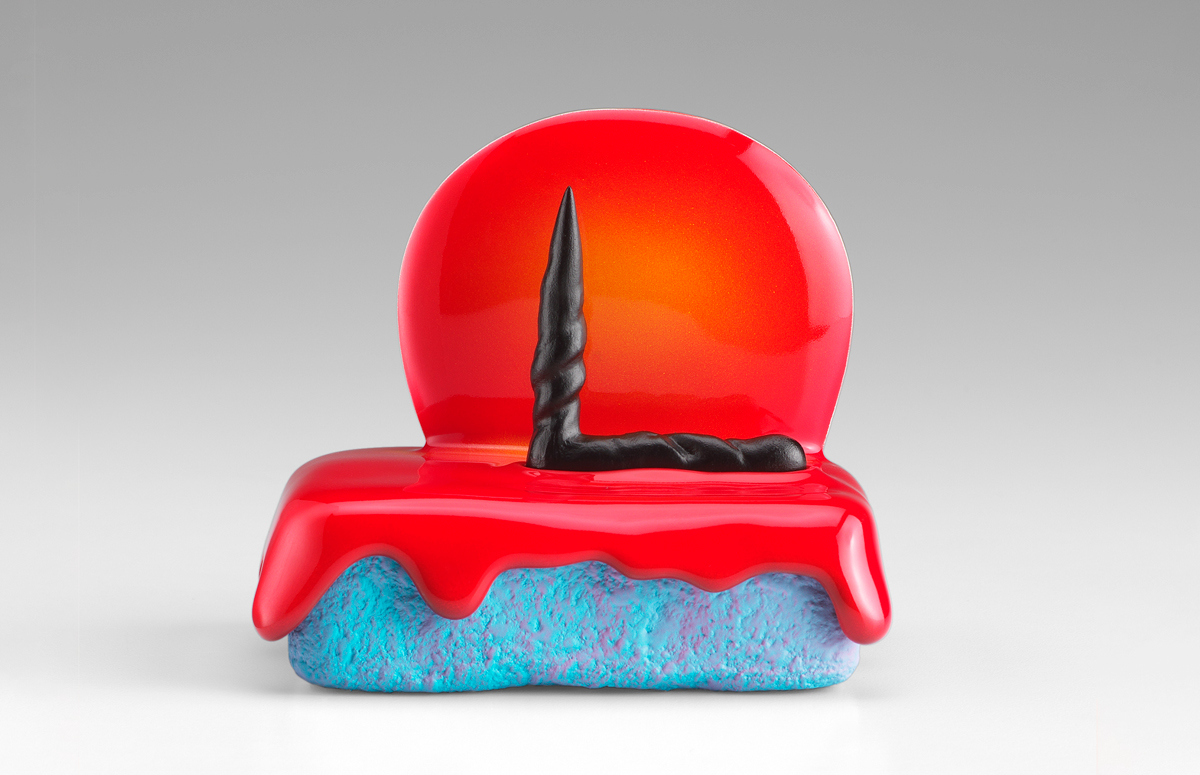 from the Last Two Decades

(Berkeley, CA) November 19, 2019—The internationally renowned artist Ron Nagle will receive a major solo exhibition next year at the UC Berkeley Art Museum and Pacific Film Archive (BAMPFA), his first Bay Area exhibition in nearly three decades. Ron Nagle: Handsome Drifter is a survey of sculptures and drawings created over the last twenty-five years by the San Francisco–based artist, who has been integral to the development of ceramics over the course of his sixty-year practice. Developed in close collaboration with the artist himself, the exhibition marks the most comprehensive exploration of Nagle’s recent work in a US museum.

Ron Nagle: Handsome Drifter features more than forty works by the artist, including twenty-seven of the meticulously crafted small-scale sculptures for which he is best known. Often no taller than a few inches, these colorful and idiosyncratic works combine the influences of Modernism, middlebrow culture, and Pop sensibility with historical references as eclectic as Momoyama Japanese ceramics, Abstract Expressionism, and Charlie Chan films. A fundamental part of Nagle’s practice is his use of conceptual drawings as an early reference point for his three-dimensional works; these deceptively casual sketches, sometimes rendered on ruled notebook paper, are an important complement to his ceramic sculptures and will be prominently displayed in the exhibition.

Ron Nagle: Handsome Drifter is accompanied by a fully illustrated catalog edited by Apsara DiQuinzio, BAMPFA’s senior curator of modern and contemporary art and Phyllis C. Wattis MATRIX Curator, who organized the exhibition. The catalog includes original essays by DiQuinzio and the Berlin-based art critic and theorist Jan Verwoert, as well as an extended interview with Nagle conducted by curator and director Dan Byers of Harvard’s Carpenter Center for the Visual Arts.

Nagle’s exhibition at BAMPFA coincides with renewed global interest in the artist’s practice following his celebrated contributions to the Venice Biennale in 2013. Since that time, Nagle’s work has been presented in solo exhibitions at the San Diego Museum of Art; Rotterdam’s Museum Boijmans van Beuningen; the Fridericianium, Kassel, Germany; the Perimeter, London; and Secession, Vienna, as well as in exhibitions at Matthew Marks Gallery, New York, and Modern Art, London. His BAMPFA survey offers Bay Area audiences a timely opportunity to rediscover the work of an internationally celebrated artist with deep roots in San Francisco, where he has been a major force in the local art scene for more than half a century.

An apprentice of the influential ceramicist and UC Berkeley professor Peter Voulkos, Nagle was an early proponent of rejecting the medium’s association with decorative art and, instead, embracing the full extent of its sculptural and conceptual possibilities. Nagle’s early works included many roughly textured cups made of earthenware, and he has continued to experiment with the cup form over the decades. During that time, he also has pushed the limits of the medium with innovative techniques such as low-fire slip casting to create the smooth surfaces and brilliant colors that have become a hallmark of his work. Nagle’s exhibition at BAMPFA highlights the extent to which his objects have evolved from the vessel format toward a more sculptural, abstract design, uniting a sense of playfulness with a keen attention to color, texture, and form.

Ron Nagle: Handsome Drifter highlights the extent to which the artist’s practice of the last two decades continues to expand the ceramic medium in innovative new directions. In some of his recent work, Nagle has introduced synthetic materials, such as polyurethane and epoxy resin, to enhance the distinctive sheen of his brightly colored objects. Often, he deliberately over-glazes his delicate sculptures, applying as many as thirty layers and firings to each work. Many of these pieces are given playful or suggestive titles that evoke cultural reference points both popular and obscure, such as Duck Salad (2005), Boston Scrambler (2015), and Night of the Hunter (1998). The latter is named for the iconic Hollywood film noir from 1955 starring Robert Mitchum, which Nagle will introduce at a screening at BAMPFA on Wednesday, January 15, 2020, at 7 p.m.

“Ron Nagle is a luminary of the global art world and a true San Francisco original: a brilliant artist who has spent the past six decades pushing the ceramic medium in new and exciting directions, inspiring a generation of artists across and beyond California,” said DiQuinzio. “His work has delighted audiences for decades with an uncommon blend of exquisitely beautiful formalism and playful buoyancy, a combination that is vividly distilled in the sculptures and drawings on view at BAMPFA—many of which have never been seen in the Bay Area until now.”

In conjunction with the exhibition, BAMPFA will present a curator’s walkthrough with DiQuinzio on Wednesday, January 15, 2020, at noon. Additional programs include family-friendly art-making workshops inspired by Nagle’s work on Saturday, February 8, 2020, at 11:30 a.m. and 1 p.m., and a gallery talk with the independent curator and writer Juana Berrío on Friday, February 14, 2020, at noon. Additional gallery talks will also take place throughout the run of the exhibition with Steuart Pittman and Nathan Lynch, artists and former students of Nagle’s. A public conversation between Nagle and his close friend Don Ed Hardy will occur in April 2020. All programs are free with museum admission; for current programming information, visit bampfa.org/ron-nagle-handsome-drifter.

Ron Nagle lives and works in San Francisco and earned his BA from San Francisco State University (1961). Solo exhibitions include Secession, Vienna (2019); Fridericianium, Kassel (2019); the Perimeter, London (2019); Museum Boijmans van Beuningen, Rotterdam (2015); San Diego Museum of Art (2014); Mills College Art Museum, Oakland (1993; traveled to Carnegie Museum of Art, Pittsburgh); St. Louis Art Museum (1979); and University Art Museum, Berkeley (now the Berkeley Art Museum and Pacific Film Archive) (1979). Nagle’s work was included in the fifty-fifth Venice Biennale (2013) and Not New Work: Vincent Fecteau Selects from the Collection (2009) at SFMOMA. Nagle is the recipient of a Guggenheim Fellowship Award and a National Endowment for the Arts Fellowship. He has taught ceramics at UC Berkeley, the San Francisco Art Institute, California College of the Arts, and Mills College, where he taught for thirty-two years. In addition to his career as an artist, Nagle is an accomplished musician.