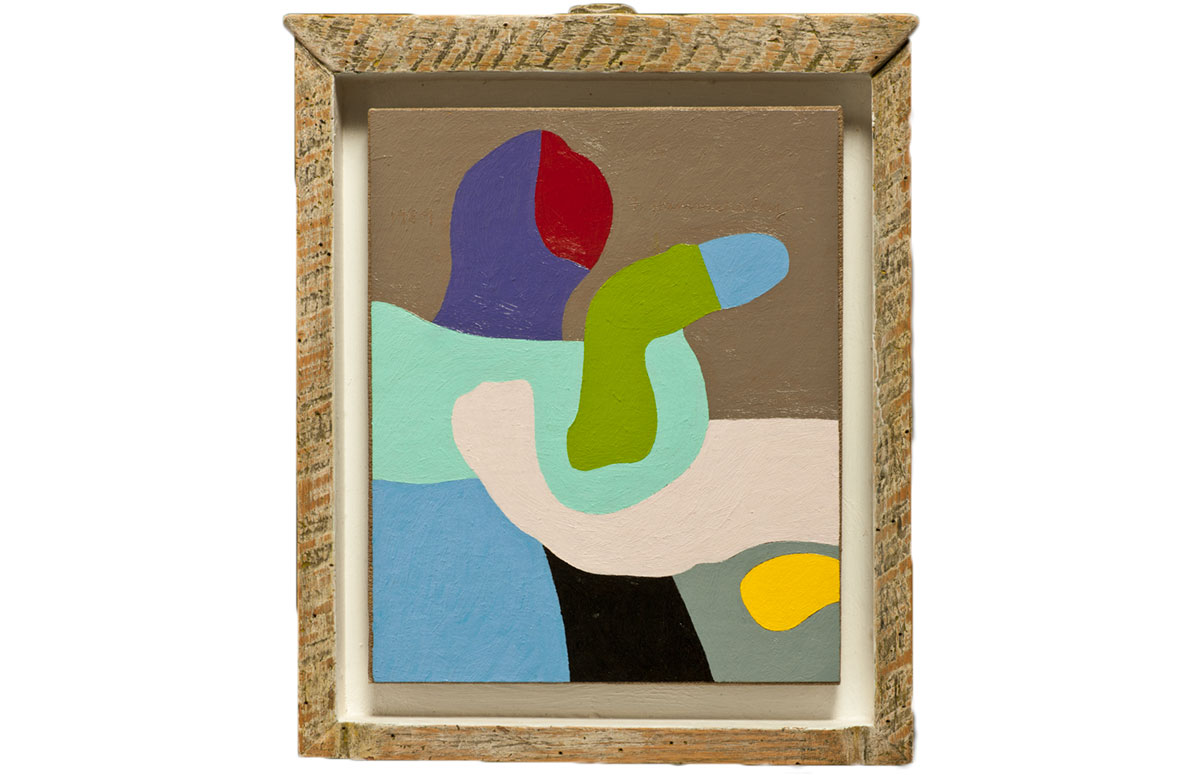 (Berkeley, CA) April 2, 2019—The UC Berkeley Art Museum and Pacific Film Archive (BAMPFA) presents a major new survey this spring of work by Frederick Hammersley (1919–2009), an artist renowned for pushing boundaries of form and style across a seven-decade practice that spanned much of the twentieth century. Highlighting a recent gift of work to the museum from the Frederick Hammersley Foundation, Looking: The Art of Frederick Hammersley features more than 100 works that highlight the distinctively broad scope of Hammersley’s creative output, which included experiments in photography, painting, printmaking, drawing, sculpture, and early computer art. Accompanied by a new catalog publication, the survey marks the first notable solo exhibition of Hammersley’s work in the Bay Area since the artist’s death in 2009.

Hammersley was most closely associated with the Abstract Classicist movement that he helped originate in the 1950s, which was characterized by a style of hard-edged abstract painting that anticipated the emergence of Minimalism. Though Hammersley’s breakthrough came with his participation in the groundbreaking 1959 exhibition Four Abstract Classicists, which effectively established an identity for West Coast abstract artists, his practice soon diverged toward more organic style, including several experiments with hand-drawn portraiture that are featured in this exhibition. Hammersley was also one of the first American artists to explore the use of early computer technology as a composition tool, and his survey at BAMPFA features a series of notable computer drawings that he created after relocating to Albuquerque in the 1960s.

Hammersley also maintained a strong interest in photography throughout his practice, and produced numerous photographs in both documentary and abstract styles. Looking: The Art of Frederick Hammersley includes a rare presentation of one of Hammersley’s most significant photography series: the Northridge Portfolio, a mini-retrospective of his photographic oeuvre that the artist created for an exhibition at California State University, Northridge in 1988. The portfolio has been reassembled for the BAMPFA survey, which presents the complete series of silver gelatin prints.

In conjunction with Looking: The Art of Frederick Hammersley, BAMPFA is publishing an illustrated catalog that further illuminates the artist’s legacy. The publication includes an essay by Director and Chief Curator Lawrence Rinder, as well as an original chronology of Hammersley’s life and work. In addition, BAMPFA has commissioned a short documentary about Hammersley that includes interviews with scholars and fellow artists, which will be viewable in the exhibition space and online.

“In 1967 Frederick Hammersley donated a painting, Square Off (1966), to what is now BAMPFA, which was for years the only work by the artist in our collection,” said Rinder, who organized the exhibition. “Then, in 2017 the Frederick Hammersley Foundation made an extraordinary donation of more than 100 works including paintings, drawings, prints, photographs, and a sculpture. Looking: The Art of Frederick Hammersley is a celebration of this generous gift and provides a rare opportunity to enjoy Hammersley’s work in its exceptional breadth and diversity.”

On Sunday, May 5 at 2 p.m., BAMPFA hosts a colloquium on the legacy of Frederick Hammersley, featuring remarks by several scholars and curators who have written about his work. Families are invited to engage with the exhibition through BAMPFA’s Gallery + Studio program, which offers art-making workshops inspired by Hammersley’s grid-based compositions on Saturday, May 11 at 11:30 a.m. and 1 p.m. The programs are free with museum admission.

Frederick Hammersley was born in Salt Lake City, Utah, in 1919. He attended the University of Idaho from 1936 to 1938, followed by the Chouinard School of Art in Los Angeles from 1940 to 1942. He served in the U.S. Army during World War II. At the end of his service, he was stationed in Paris, where he attended classes at the École des Beaux-Arts in 1945. Under the G.I. Bill, he returned to the Chouinard School of Art in 1946, and then continued his artistic studies at the Jepson Art Institute from 1947 to 1950.

He lived in Los Angeles in the 1950s. During that time, he developed his distinct “hard-edged” technique and began associating with a small group of artists known as the Abstract Classicists. This hard-edged style made its debut in 1959 in an exhibition entitled Four Abstract Classicists, which included works by Hammersley, John McLaughlin, Lorser Feitelson, and Karl Benjamin. In 1968, he moved to Albuquerque, New Mexico.

His artwork may be found in the collections of the Corcoran Gallery, Washington, DC; the Los Angeles County Museum of Art; the San Francisco Museum of Modern Art; the Albright-Knox Art Gallery, Buffalo, New York; the Albuquerque Museum, New Mexico; the Baltimore Art Museum, Maryland; the Santa Barbara Museum of Art, California; and the Oakland Museum of California; among others.