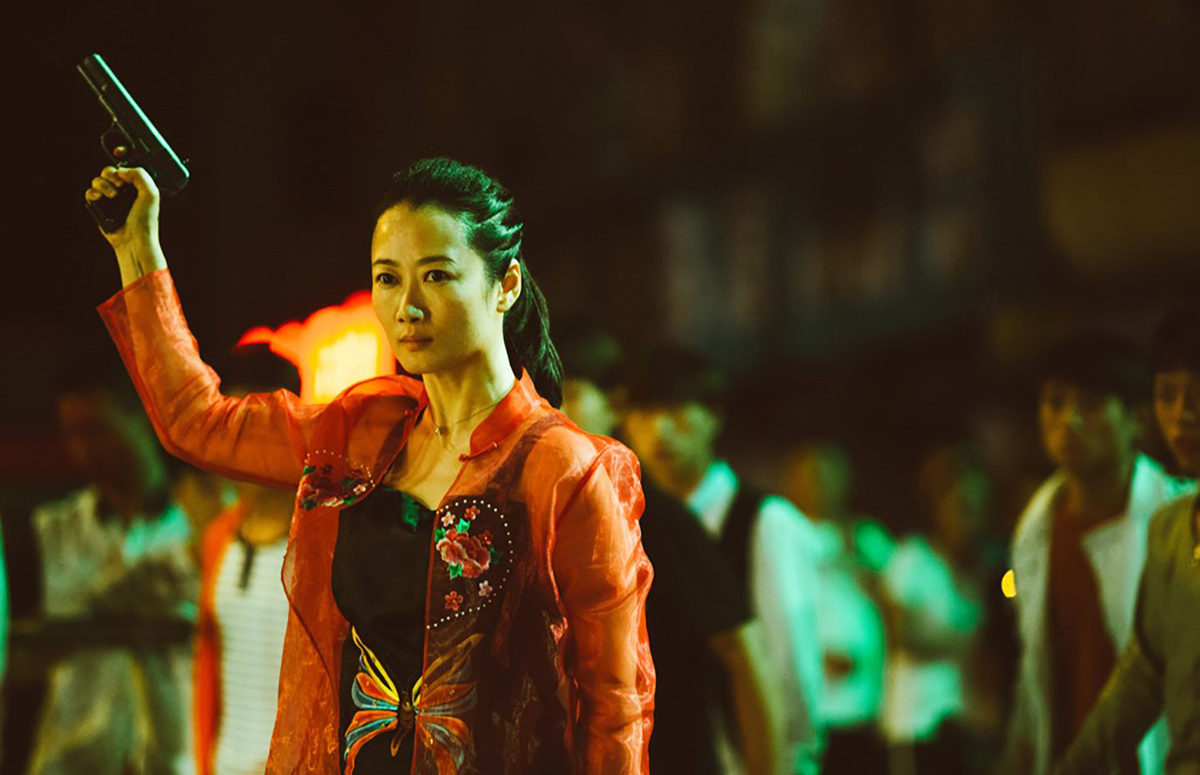 SAN FRANCISCO AND BERKELEY, CA—The San Francisco Museum of Modern Art (SFMOMA) in partnership with the Berkeley Art Museum and Pacific Film Archive (BAMPFA) announce Jia Zhangke: Rhythms From Life, featuring live appearances by the acclaimed director in both Berkeley and San Francisco. The joint screening series is timed with SFMOMA’s exhibition Art and China After 1989: Theater of the World. The director’s visit coincides with two advance presentations of his latest film, Ash is Purest White, which will open theatrically in the Bay Area in mid-March and is distributed by Cohen Media Group. [Bay Area press for Ash is Purest White is being handled by Karen Larsen Associates; please see contact information below.]

Jia Zhangke: Rhythms From Life is a SFMOMA – BAMPFA co-presentation with promotional assistance from SFFILM. At BAMPFA, the series is part of Afterimage: Filmmakers and Film Critics in Conversation and will screen from February 6 through 17. At SFMOMA, the series will take place between February 8 through 24 and represents the eighth installment of the museum’s Modern Cinema program, whichseeks to highlight the ongoing dialogue between the critically acclaimed filmmakers of today—particularly those showcased in contemporary visual culture—and the great masters of cinema’s past.

Born in 1970 and raised in the dusty mining town of Fenyang, Jia Zhangke is celebrated for films that explore the powerful changes sweeping Chinese society and examine how these vast changes, including globalization, rising wealth and inequity, and the impact of technological advances have transformed relationships and how we view China. Jia’s film Still Life received the prestigious Golden Lion award at the Venice Film Festival in 2006, and in 2013 he received the Best Screenplay Award at the Cannes Film Festival for A Touch of Sin.

In addition to surveying all of Jia’s most significant feature films, SFMOMA and BAMPFA’s collaboration features the San Francisco premiere of Ash is Purest White and a slate of films long admired and studied by the director—including major works by Yasujiro Ozu, Hou Hsiao-hsien, Robert Bresson and King Hu, along with an exciting selection of historic Chinese films and more. Two of Jia’s portrait-style documentaries will be shown alongside companion films, providing the opportunity to see his unique take on the documentary form. This program will consider the world as a place of flux and transformation, working against a rapidly changing state where some prosper, others are left behind and some remain in limbo – at once gritty and dreamy, these films share existential perspectives spanning time and place.

“Jia’s role in contemporary filmmaking cannot be overstated, from his beginnings as an ‘underground’ filmmaker unable to get released in China to becoming a renowned auteur, his has been an exciting path to follow! I’m looking forward to partnering with BAMPFA on this program to bring him to the Bay Area. He uniquely embeds criticism of contemporary Chinese society and each film takes on a new tone – satire, violent thrillers, grim and gritty portraits, odes to melodrama and even sci-fi. You’re thrust into new possibilities of storytelling,” said Gina Basso, manager of film programs for SFMOMA’s Media Arts department. “It’s exciting to able to celebrate his work in this way, alongside other filmmakers whose beautiful, haunting stories about people and places navigations situations beyond their control.”

“We are thrilled to have a chance to host filmmaker Jia Zhangke,” says BAMPFA senior film curator Susan Oxtoby. “BAMPFA’s last comprehensive retrospective of Jia’s films was in 2008. Jia Zhangke is right at the top of our wish list as a film director whose work we greatly admire and whom we have long wanted to host in person. It will be so rewarding to welcome him to Berkeley, where our audience members, including many UC Berkeley students and members of the campus community will be eager to hear him speak about his work. BAMPFA is delighted to have this occasion to partner with SFMOMA on special collaboration and we thank our colleagues at SFFILM for helping us promote these important screenings to the wider Bay Area film-going community.”

The films by other directors presented alongside Jia’s work at SFMOMA share some of the director’s thematic interests while reflecting their creators’ own particular styles: from neo-realistic portraits of vagabonds leaving their worlds behind (Kelly Reichardt’s Wendy and Lucy and Michelangelo Antonioni’s Il Grido) to unforgettable depictions of the pains of youth in Hou Hsiao-hsien’s The Boys From Fengkuei and Lou Ye’s epic Summer Palace. Local filmmaker Wayne Wang introduces his 1982 classic film Chan is Missing, an archival 35mm print on loan from the BAMPFA Collection, a gem of American independent filmmaking that pre-dates Jim Jarmusch and Spike Lee. Generational conflict abounds in the heartbreaking Tokyo Story andChen Kaige’s post-Cultural Revolution milestone Yellow Earth—featuring a young girl who chooses the military over marital obligations in a film that marks a shift in Chinese filmmaking of the early ’80s. Criminal underworlds are explored in Johnnie To’s gangster classic Election along with prolific filmmaker RaúlRuiz’s debut work Three Sad Tigers, made just before his exile from Chile. The series offers two opportunities to see Robert Bresson’s art house classics Pickpocket and A Man Escaped. Chen Kaige’s sprawling backstage-at-the-opera melodrama Farewell My Concubine provides another opportunity to delve into his work. Following Jia’s cinema-centric documentary I Wish I Knew, SFMOMA screens films referenced heavily in the film, Fei Mu’s pre-Communist drama Spring in a Small Town and Hou Hsiao-hsien’s Flowers of Shanghai. King Hu’s great wuxia classic A Touch of Zen reveals the inspiration of Jia’s film A Touch of Sin and conversely different looks at urban life and survival in Street Angel Yuan Muzhi’s 1937 undisputable classic from Shanghai’s golden age of cinema and Roberto Rossellini’s 1945 wartime occupation drama, Rome, Open City.

A full list of screenings follows below, including information about appearances by Jia and other guests. Descriptions of individual films can be found at sfmoma.org/event/series/modern-cinema-jia-zhangke/ and bampfa.org/program/rhythms-life-jia-zhangke.

SFMOMA Member tickets will be available for a $5 discount through the first day of the series, then they return to member price of $10.

General public tickets for SFMOMA screenings are $12 and will be available online, or onsite at SFMOMA during regular business hours. Modern Cinema tickets do not include admission to SFMOMA galleries. Ticket-holders for Modern Cinema should enter through the museum’s Joyce and Larry Stupski Entrance on Minna Street (between Third and New Montgomery Streets). For up-to-date program information and tickets, visit sfmoma.org/modern-cinema.

Thanks to our community affiliate SFFILM.

Rhythms from Life: Jia Zhangke is organized at BAMPFA by Senior Film Curator Susan Oxtoby and presented at BAMPFA in collaboration with SFMOMA and community partner, SFFILM. Jia Zhangke’s visit is made possible by generous funding from the Hollywood Foreign Press Association® and presented as part of Afterimage: Filmmakers and Film Critics in Conversation.

About the Phyllis Wattis Theater at SFMOMA

As part of the opening of the new and expanded SFMOMA in May 2016, the Phyllis Wattis Theater also received a major renovation and system update creating one of the most enjoyable places to see film in the Bay Area. A new, state-of-the-art NEC digital projector offers Modern Cinema the ability to present films on a 24 x 12-foot screen with the capacity to show aspect ratios of 1:37, 1:66, 1:85 and 2:39. The Wattis Theater can also screen films via new Kinoton projectors in 16 and 35mm formats. Because sound is integral to the cinematic experience, a new Meyer Sound Cinema Surround System enhances the nuance and precision intended by the filmmaker. Comfortable new seating with cup holders round out the Wattis Theater experience.

SFMOMA is dedicated to making the art for our time a vital and meaningful part of public life. Founded in 1935 as the first West Coast museum devoted to modern and contemporary art, a thoroughly transformed SFMOMA, with triple the gallery space, an enhanced education center and new public galleries, opened to the public on May 14, 2016.

For inquiries about Ash is Purest White, please contact Larsen Associates at publicity@larsenassc.com