The largest exhibition of Rosie Lee Tompkins’s work to date, this retrospective reveals her as a brilliantly inventive quiltmaker and an artist of stunning variety, depth, and impact. 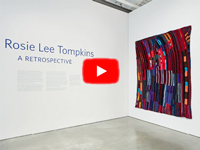 Rosie Lee Tompkins (1936–2006) is widely considered one of the most brilliant and inventive quiltmakers of the late twentieth and early twenty-first centuries. Her reputation has grown to the point where her work is no longer considered solely within the context of...

Rosie Lee Tompkins (1936–2006) is widely considered one of the most brilliant and inventive quiltmakers of the late twentieth and early twenty-first centuries. Her reputation has grown to the point where her work is no longer considered solely within the context of quilting, but celebrated among the great American artistic achievements of our time. Rosie Lee Tompkins: A Retrospective is the largest and most comprehensive exhibition of the artist’s work to date, featuring approximately seventy quilts, pieced tops, embroideries, assemblages, and decorated objects. It reveals Tompkins to be an artist of extraordinary variety, depth, and impact.

Born Effie Mae Howard in 1936 in Arkansas, the artist later adopted the pseudonym Rosie Lee Tompkins. She learned quilting from her mother as a child but did not begin to practice the craft seriously until the 1980s, when she was living in the Bay Area city of Richmond. Often inspired by her belief in God, Tompkins made quilts directed toward her own healing and spirituality and to honor family members. She employed a wide variety of traditional patterns, including half-squares, medallions, and yo-yos, exploring and adapting these approaches through her individual sensibility and integrating such favorite fabrics as velvet, artificial fur, and various types of glittery material. She also frequently incorporated embroidery—stitching words and citations of Christian scripture—as well as printed images on recycled clothes, which suggest the artist’s commentary on contemporary social, political, and cultural events.

Made up almost entirely of works from BAMPFA’s collection, Rosie Lee Tompkins: A Retrospective is the first in a series of exhibitions celebrating the donation of approximately 3,000 quilts by African American artists from the estate of the collector Eli Leon. This transformative bequest makes BAMPFA a leader in the field of African American art with what is probably the largest public collection of African American quilts in the world.

Memorable experiences with a dynamic community of art and film enthusiasts. Become a BAMPFA member today.