As inspirational as it is harrowing. 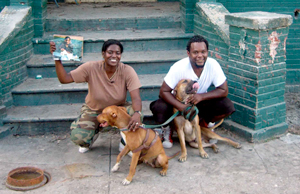 BAMPFA members can watch this film for free with a password August 6–8. To find your password, check your most recent BAMPFA member email or the BAMPFA program brochure you received in the mail, or email bampfa@berkeley.edu.

Not yet a member? Join today!

An aspiring New Orleans rapper turns a video camera on herself and her neighbors—and captures Hurricane Katrina and its insidious after-effects—in this remarkable look at a community under siege from both a sudden natural disaster and a decades-long grind of institutional and economic racism. Winner of the Documentary Grand Prize at the 2008 Sundance Festival, Trouble the Water intertwines the home videos of amateur musician and "street hustler" Kimberly Rivers Roberts with the work of documentary film veterans Tia Lessin and Carl Deal (frequent Michael Moore collaborators), who showcase the attempts by Roberts and her community to recover. Both its anger and love fueled by the "giant personality" at its core, Trouble the Water pulls no punches when hitting the appropriate targets such as government inaction during the storm, bureaucratic incompetence afterwards, continuing media distortions, economic and racial biases, and more; while made thirteen years ago, it speaks just as clearly to today's America.

PART OF THE SERIES: Streaming: Free Films for Members 2021