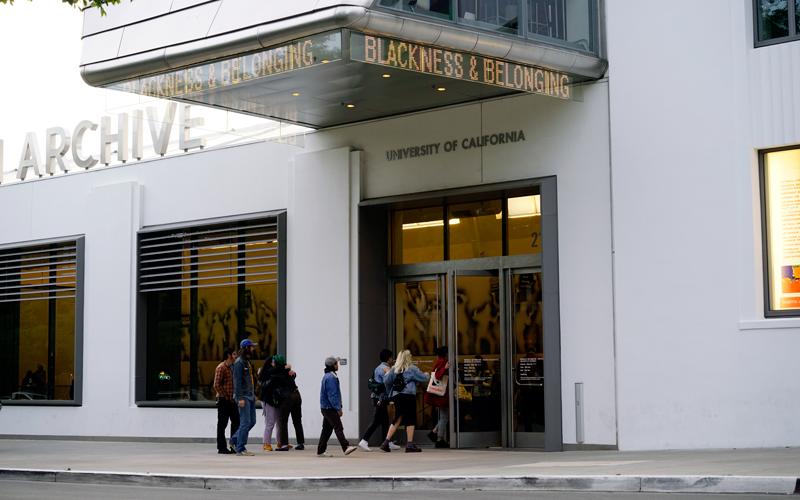 The UC Berkeley Art Museum and Pacific Film Archive has just received a remarkable opportunity . . . and challenge. Continuing the great philanthropic legacy that has been central to BAMPFA throughout its history, an extraordinary family—among our most passionate and generous supporters—has announced a major initiative to match all new and upgraded memberships as well as new and increased gifts two-to-one.

This initiative is designed to provide an exciting incentive for new members to join BAMPFA and for current members to renew at a higher level. It is also designed to incentivize new and increased major gifts in support of our art, film, and education programs. It is our hope that this match will enable BAMPFA to broaden and strengthen its already vigorous donor base, and to better reflect our dramatically increased attendance since our move to downtown Berkeley.

With its emphasis on encouraging broad support for BAMPFA from its community, and the donor family’s commitment to sustaining the institution’s mission well into the future, this initiative builds on a long history of transformative philanthropy at BAMPFA.

Like many cultural institutions, BAMPFA has been built and sustained by generous donations from many extraordinary individuals. The origins of the collection go back to the 1870s with gifts from patrons such as Henry Douglas Bacon, who donated to the University his library, art collection, and half the funds needed for construction of the Bacon Library and Art Museum—just the third structure on campus when it opened in 1881. From these initial gifts to more recent donations, the generosity of individual donors has contributed to several areas of world-class collection strength. Perhaps most significantly, in 1963 the renowned Abstract Expressionist artist and teacher Hans Hofmann donated forty-seven of his paintings along with a cash gift that helped to fund construction of architect Mario Campi’s iconic Brutalist building to house the University Art Museum, which opened in November 1970. (The Pacific Film Archive opened to the public in Campi’s building a few months later.)

But while the vision of individual donors has shaped this institution’s history, equally integral to its identity has been a constant focus on service to both the University and the wider community. This combination of individual generosity and commitment to community is reflected in the backstory to BAMPFA’s very name. In 1995, commemorating twenty-five years in the Campi building, an anonymous donor pledged $5 million to the museum as a challenge grant. The challenge had two parts. First, it required supporters to match the donor’s $5 million contribution; second—in a departure from conventional naming practice—this donor requested that the museum’s name honor its community. Thus, what was then known officially as the University Art Museum and Pacific Film Archive of the University of California at Berkeley became the UC Berkeley Art Museum and Pacific Film Archive.

In 2016, the new BAMPFA opened in its current building on Center Street, at the western gateway to the University and just a block from the Downtown Berkeley BART station. Here, it is perfectly positioned to serve both campus and the wider community. In our new location, attendance and membership have more than doubled. Last year alone, BAMPFA welcomed over 160,000 visitors and presented 29 gallery exhibitions, 450 film programs, and more than 200 in-person events. The Fisher Family Art Lab, with drop-in art making for all ages, offered a space of creativity and community for over 7,000 makers; and our popular school field trips program served more than 4,000 children.

Still, it has never been more challenging to sustain high-quality, cutting-edge art and film programming while making these offerings accessible and relevant. Therefore, a family that is among our most passionate and visionary supporters is offering BAMPFA this remarkable opportunity to increase membership support and giving—and offering our members and donors an opportunity to have their contributions make an even bigger impact.

Find out more about how you can help us to take advantage of this generous offer by joining BAMPFA, renewing your membership at a higher level, or making a new or increased gift today. Your entire contribution will be matched two-to-one, ensuring BAMPFA’s continued excellence and edge as a vibrant cultural center for our entire community.