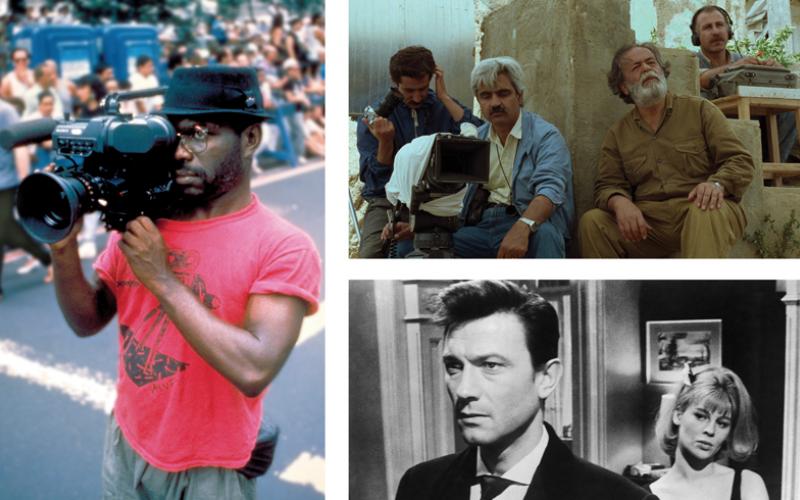 Clockwise from top left: We pay tribute to the groundbreaking career of auteur and activist Marlon Riggs, showcase the towering oeuvre of Iranian filmmaker Abbas Kiarostami, and look back at the radical innovations of 1950s and ’60s British cinema.

The British are coming! With Brexit on the horizon, BAMPFA opens our fall film season with a look back at an earlier time when Britons were fired up and ready for revolution. Looking Back at the British New Wave headlines an exciting new season at BAMPFA, bringing an electrifying series of films by the leading directors of the New Wave that crested in British cinema during the 1960s. Films like Billy Liar, Alfie, and Look Back in Anger brought an anarchic spirit and experimental flair—plus newly minted stars like Albert Finney, Laurence Harvey, and Julie Christie—to global audiences of the era. Today their work feels more relevant than ever, which film historian David Thomson explores in a related In Focus lecture/screening series.

Closer to home, BAMPFA presents a survey of the Bay Area’s own Marlon Riggs, a groundbreaking auteur and activist who shattered the limits of black queer representation with films like Tongues Untied and Black Is . . . Black Ain’t before his untimely death in 1994. Riggs is one of many remarkable local filmmakers on screen at BAMPFA this season, which also includes a celebration of the Berkeley Film Foundation (BFF) on its tenth anniversary. Our friends at the BFF have been a major force in supporting bold, risk-taking independent cinema in Berkeley for the past decade, and we’re proud to present a series of some of their greatest work—all with filmmakers in person—plus two screenings on our giant outdoor screen.

For more of these alternative visions, we turn to . . . Alternative Visions, BAMPFA’s annual series of experimental films that highlights the enduring strength of the avant-garde filmmaking community. Complementing this year’s installment is an equally experimental series Strange, celebrating surrealist tendencies in cinema and presented in conjunction with an eponymous art exhibition in BAMPFA’s main gallery. And for the loopiest vision of all, we’ve brought together a survey of films by the late, great Jacques Tati, cinema’s beloved choreographer of absurdist comedy.

Our fall season also features two series drawn from BAMPFA’s own film collection, bringing you rare gems like those in our Out of the Vault series on Native American cinema. A program of rare Soviet silent films from BAMPFA’s collection will include remarks by the Russian film historian Peter Bagrov, who enthralled audiences during his visit to BAMPFA last year. We also revisit the unsung legacy of the midcentury Chinese filmmaker Zheng Junli, a brilliant actor and director whose career was cut short by China’s Cultural Revolution. And our View Finders series, highlighting the remarkable contributions of women cinematographers to world cinemas, expands into the fall with a program of remarkable narratives shot from a female perspective.

You didn’t think we forgot about Abbas Kiarostami, did you? BAMPFA’s five-month retrospective of the towering icon of Iranian cinema continues through December, including an In Focus series that features distinguished guest lecturers discussing his work. And back by popular demand, Sergei Bondarchuk’s Academy Award–winning War and Peace returns for a limited run in our theater throughout September. There’s much more where that came from, so check out our complete fall line-up below, which also includes limited engagements, family matinees, and more.

Out of the Vault: Native American Reelism (September 12—November 14)

No Regrets: A Celebration of Marlon Riggs (September 19—November 25)

Looking Back at the British New Wave (September 21—November 30)